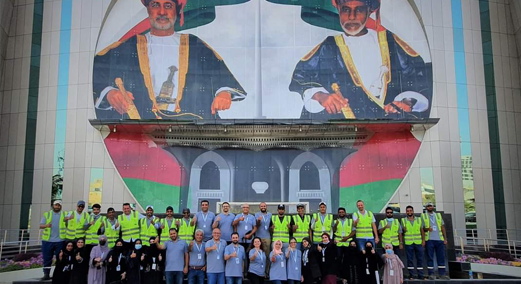 The project entails Nafith installing iGates on all entry points and iPortals on the exit points of all of the Industrial Cities, providing for Truck Marshalling Yards as well as a comprehensive online/mobile access control system that enables users to access the system 24x7 via multiple channels. The system will also apply traffic capacity optimization of traffic to streamline access.

Nafith will also install weighing equipment at the entrances and exits of the Industrial Cities in order to apply the Sultanate’s axle load limits on trucks and weigh the trucks for the users.

Nafith will apply a consort of technologies to achieve the project objectives: Secure RFID, Machine Learning Vision, intelligent Gates, road iPortals, Weigh-In-Motion scales for trucks, and traffic classification devices, all of which are either manufactured by Nafith or acquired directly by it.

Furthermore, Madayn will work closely with Nafith in order to introduce advanced logistics services in certain select of Industrial Cities that will augment the current logistics services and further Madayn’s vision in enhancing its offerings.

Nafith will implement the first four cities of Nizwa, Suhar, Rusail and Mazyouneh within the years 2019-2020, while the other remaining cities between 2021-2022. Nafith will be investing OMR 6.5 million within the first phase of the project, with that investment expecting to double over the lifetime of the contract.

The CEO of Madayn, Mr. Hilal bin Hamad Al Hasani has expressed that this agreement culminates the efforts of two years in selecting the proper service delivery partner, ensuring that the company has the capacity to deploy and offer the services anticipated from the contract at the technological level that exceeds the current standards. Mr. Al Hasani also expressed that this project will provide 135 professional jobs, 80% of which are Omanized and will be directly related to Madayn’s future vision.

Mr. Sameer Mubarak, Chairman of the Board of Nafith, emphasized that this project represents a cornerstone in Nafith’s offerings for the MENA region and beyond, as well as inducing significant and positive change to Madayn’s offering.“This investment will contribute to the expansion of the company's resources opening new horizons in the global market, where we can offer what we do best: Trade and Transport facilitation (TTF) for emerging economies.” Said Nourah Mehyar, CEO Nafith International.

Nafith Logistics is a partnership between Nafith International LLC and Shumookh Investments. Nafith Logistics International is a company specialized in delivering services to ports, Customs, and Logistics Hubs in order to manage, control, streamline, and monitor cargo and vehicle traffic, including data acquisition and provision. Nafith utilizes state of the art technology, including IoT, Deep Learning to fulfill its objectives.

Nafith International LLC is Foursan Group portfolio company that also counts among its investors the International Finance Corporation (World Bank Group). Nafith subsidiaries operate in Jordan, Iraq, UAE, and have presence in other Asian countries, such as Pakistan and the Philippines. This project is part of the expansion drive of the company in the Gulf, Asia and Africa.